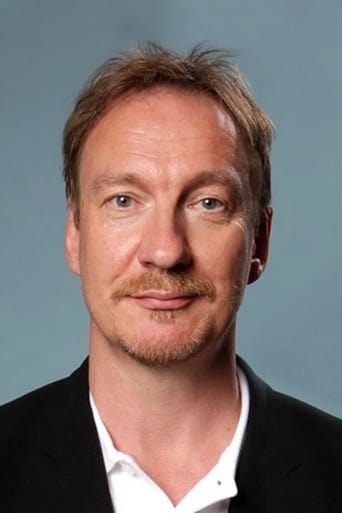 Thewlis had a minor role in an episode of the 1980s sitcom Up the Elephant and Round the Castle. He also appeared in an episode of popular sitcom Only Fools and Horses (1985) as a friend of Rodney. His first professional role was in the play Buddy Holly at the Regal in Greenwich. Thewlis's breakout role was Naked (1993; dir. Mike Leigh), as the main character, Johnny, a homeless, highly intelligent, embittered, rambling street philosopher, for which Thewlis was named Best Actor by the National Society of Film Critics (United States), the London Film Critics Circle, the Evening Standard, the New York Film Critics' Circle and the Cannes Film Festival. That same year, he appeared on television as a sexual predator named James Jackson in Prime Suspect 3, opposite Helen Mirren and Ciarán Hinds. Before that, his first television appearance was in Valentine Park. During the 1990s, Thewlis appeared in a variety of films, mostly fantasy and period, including Restoration (1995), Black Beauty (1994), Total Eclipse (1995) with Leonardo DiCaprio, The Island of Dr. Moreau (1996), Dragonheart (1996), and Seven Years in Tibet (1997), opposite Brad Pitt. He was nominated for a British Independent Film Award for Divorcing Jack (1998), and played Clov in a television film of Samuel Beckett's Endgame (2000). Notable appearances also include Bernardo Bertolucci's Besieged (1998) and Paul McGuigan's Gangster No. 1 (2000), opposite Paul Bettany and Malcolm McDowell. He auditioned for the role of Quirinus Quirrell in the Chris Columbus directed film Harry Potter and the Philosopher's Stone, but the part went to Ian Hart. Despite missing out on the first film, he was cast in 2004 as Professor Remus Lupin in Harry Potter and the Prisoner of Azkaban. He did not have to audition as he was director Alfonso Cuarón's first choice for the role. Thewlis reprised the role in four other films in the series. He appeared as an SS Commandant of a Nazi death camp and father of the main character in The Boy in the Striped Pyjamas, which was well received. Other credits include Ridley Scott's Kingdom of Heaven (2005), Terrence Malick's The New World (2005), and The Omen (2006). Thewlis played the late Dr. Michael Aris, husband of Nobel Prize laureate Aung San Suu Kyi of Burma, with Malaysian actress Michelle Yeoh as Suu Kyi, in the biopic The Lady directed by Luc Besson. In 2012, he received an International Festival of Independent Cinema Off Plus Camera Award. In the same year, he also played in Separate We Come, Separate We Go, directed by Harry Potter co-star Bonnie Wright. In June 2015, Thewlis was reported to be filming scenes for a Donald Crowhurst biopic, The Mercy, on the beach at Teignmouth, Devon, playing Donald Crowhurst's press agent, Rodney Hallworth, while Colin Firth is playing Donald Crowhurst. He also starred in Regression, a thriller released in autumn 2015. In September 2015, Thewlis starred as Inspector Goole in Helen Edmundson's BBC TV adaptation of J. B. Priestley's An Inspector Calls. In October 2015, he played King Duncan in the film Macbeth.